Excuse me, I speak movie. 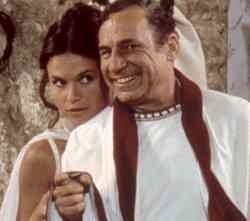 On Thursday night my clients and I were treated to dinner by Blink UX, the owners of the usability lab we were renting to conduct our work. I was sitting across from Bob, my lead client. I think Bob and I get along so well because we have similar senses of humor and we both speak in movie references. As we were all loosening up over some fine Washington State wine, Bob and I start going back and forth quoting films such as Ghostbusters, This is Spinal Tap, and Young Frankenstein. At one point, one of the younger team members (22) looked at us and asked, “What the hell are you two talking about?” She had never seen these movies. I was appalled.

I spent a lot of my childhood watching movies – at one point in time I was very shy and introverted and found comfort (and safety) in TV. When you combine that with being blessed (or is it cursed?) with a near photographic memory, you may begin to understand how I speak “movie” so fluently; its my happy place.

Growing up, I saw movies that I was too young to see. When I was 7 I saw History of the World pt 1 (how i wished Mel Brooks made pt 2 – I really wanted to see how far he could take Hitler on Ice). I was too young to get all the jokes but I remember laughing hard. My favorite joke in that movie is when Mel Brooks as Comicus is doing “stand up philosophy” for Ceaser (played by Dom Delouise) and says, “We Romans have a god for everything. The only thing we don’t have a god for is premature ejaculation, but I hear that’s coming quickly.” To be honest, I did not get it when I was 7. Unfortunately, I understood it when I was 17.

I really love comedies, particularly smart ones. The first time I saw Spinal Tap I thought that it was one of the smartest movies I had ever seen. A fake documentary of an over the hill British Heavy Metal band was, to speak British for a moment, effing brilliant. I loved that movie so much I made all of the girls I dated in high school watch it and, if they did not like, I knew that the relationship probably would not last. Sure some of them were put off by the song Big Bottoms, but how can one argue with the truth of “the bigger the cushion, the sweeter the pushin?” To be transparent, I also made them watch The Exorcist (for more nefarious motives).

I know I am getting old because I often find myself saying things like, “They just don’t make good movies anymore.” It is something my parents always said when I was growing up. Its true though – everything that comes out now has been made before. Did they really need to remake Total Recall? And I am sorry but those last 3 Star Wars movies were terrible. Lucas owes me a personal apology for those and that last Indiana Jones flick. Here’s an idea, take Jar Jar Binks and Shia LeBouef to Cloud City and freeze them both in Carbonite.

I made a few movies myself back in high school. Perhaps you are familiar with the Mike Slammer series? My friend Nick made the mistake of leaving his video camera at my house one night so Jimmy (my twin brother) and I decided to have some fun. Mike Slammer (originally spelled Slamher) was a tough as nails detective played by Jimmy. I was the antagonist, Bona – a maniacal villain intent on killing Mike Slammer to get his revenge on something that happened years ago. I even had a catch phrase – slammer would always say, “Is that you, Carbona?” and I would always reply, “No, that’s Bona, Slamma.” I can’t imagine why we never made it big.

My crowning achievement in film was a cross between Quantum Leap, Hamlet, and Bill and Ted Excellent Adventure – it was entitled Hamlet and Horatio’s Bogus Journey. I wrote it in place of writing a paper on Hamlet for my 12th grade Literature class. Mr Kriz gave me an A and the class seemed to enjoy it. Someone dared me to fit in the phrase “big cock” into the script so I had Horatio foreshadow an event to Hamlet that would happen after “the cock crows thrice.” Later in the movie my friend Chip Chippetta imitates a rooster off screen and screeches, “big cock, big cock, big cock.” The few who picked up on that laughed pretty hard.

As humans we do much to harm each other; we pollute, we fight, we neglect. But we are unlike any other animal on this planet because we also create. Movies are art – they transport us, ever so briefly, to a different time and place. They help us suspend our differences. They help change our moods. A well done movie may even help change how we view the world or a certain issue. At their best, movies inspire the artists in all of us to create.

I have mentioned some of my favorite movies in this post. What are some of yours?