Tell Someone that they Matter 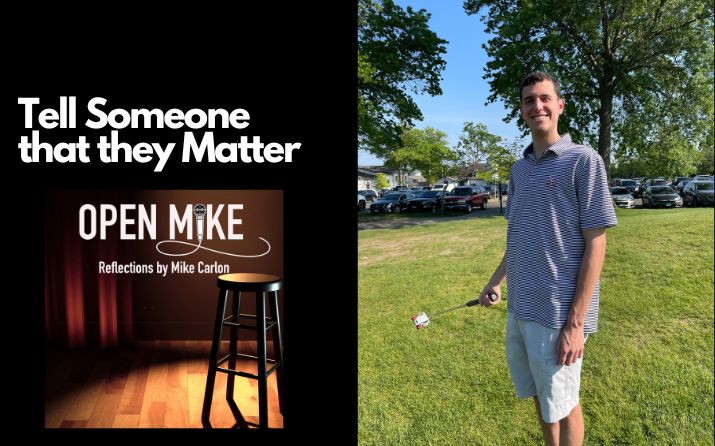 I know that many of us have a tendency to, every now and then, engage in a little negative self-talk. For me that takes two forms, the first being imposter syndrome. Even though I’ve written eight novels, run my own business, and have the opportunity to chat with very well known authors and storytellers on my podcast, I still feel as if I’m faking it and that, one day, someone will catch on and expose me as a fraud. I know that this holds me back as it limits my confidence in going after really big opportunities and it is something that I definitely have to work on.

The other way that negative self-talk comes into my life is a belief that I simply don’t matter. I know that this sounds crazy as there are so many people in my life who depend on me—family, friends, clients, etc.—but sometimes I hear this little voice whispering inside my head and it says, “Why bother, you don’t matter.” Now I’ve done some in-depth exploration on why this happens and I will not go into details as they are very, very personal, so please just take my word on it that this is something I do experience. The fallout from this, of course, is me not being able to voice what I need from the people I am most close with because, why bother? My needs don’t matter. It is as self-limiting, if not more so, than suffering from imposter syndrome.

Yesterday, however, I was given a gift. It was a reminder of just how wrong that little voice is inside my head. And believe me, I am very grateful to my nephew for giving it to me.

I looked at my calendar in the morning and realized that I had a very open afternoon, which doesn’t happen often. It was a beautiful day outside and I thought, gee, wouldn’t it be a nice day to play some afternoon golf (sans Cajun martinis for all you Jimmy Buffett fans). I checked available tee times and saw that one of our public courses was wide open for the afternoon so reached out to my son, Patrick, and nephew, Ryan, to see if they wanted to join. They jumped at the chance and we had a fun round.

I have to say, it is a humbling experience playing with these two because, well, they always beat me, and yesterday was no different. As the boys continued to outdrive me, I remembered how I introduced both to the game and thought the least they could do would be to ease up a bit on me but it was like Cobra Kai—no mercy!

While I’ve played many more rounds with Patrick than Ryan, during our round yesterday I was reminded of the first time I ever played with my nephew. From a very young age, he expressed an interest in the game and, back when he was shorter than me (his middle school years), I told him that I’d be happy to take him out one afternoon when the course was less crowded. So a decade or so ago Ryan and I went out and played 18 at our local course and, for me, it was a great afternoon of bonding and I couldn’t wait to make our twosome a threesome once Patrick was ready to hit the course.

I haven’t thought about that day in a long time, until yesterday when Ryan said, “Hey, Uncle Mike, do you know you were the first person to ever take me on the course? I still have my scorecard from that day.”

I literally had to fight back tears. I thought I was just doing a nice thing by taking him out 10 or so years ago, but his act of saving the scorecard told me that it meant so much more to him. And it also underscored that, yes, I do matter, regardless of what lie I hear from time to time as an inner voice.

It does serve as a reminder, though, that we all need to drink from the fountain of encouragement from time to time. So here’s my ask of you. Think of all the people in your life who have made a difference and reach out to at least one of them and give them a gift today. Tell them how much they matter to you. It won’t cost anything but a moment of your time and you will absolutely make their day a bit brighter. I know that Ryan turned night into day for me yesterday.

And yes, both Patrick and Ryan beat me yesterday but while our tallied numbers suggest differently, I was the big winner of yesterday’s round.