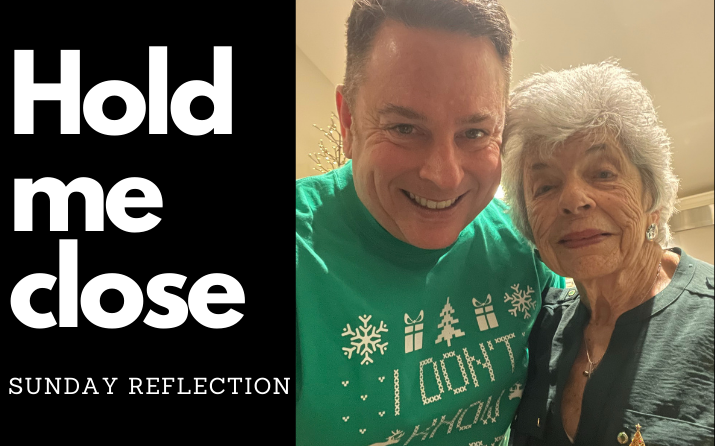 When I was out for a run this morning I decided to listen to U2s Songs of Innocence album. On it, there’s a song called Iris (Hold me Close) in which Bono sings about missing his mother and his faith that, even after the “stars go out,” he will see her again. It’s a wonderful testament to the bond he had with his mother as well as his belief in the afterlife. It also made me miss my mother.

My mom is in Florida and, while we speak regularly, we don’t get to see each other that often. For many of us, there is no substitute for a mother’s love, and that is something I have witnessed in the relationship my wife has with our children. I also know that, sometimes, you just want your mother to hold you close. And I could use a hug from her right about now.

I’ve transitioned into this odd place in life where my kids are largely out of the nest and don’t need me as much as they used to. My role in their lives is changing—there are no more hockey games, volleyball games, or theater performances to go to. I don’t have to drop anyone off or pick anyone up from so-and-so’s house. There are no crappy TV shows to stream (Sorry Gracie but MTVs Teen Wolf was bad, but it was a testament of my love for you that I watched it).

For the past 19 years and change, I’ve defined myself in the role of dad and, while that will always be my role, I need to shift to another focus. So it begs the question, who am I?

This question started to bubble up around mile 4 this morning. At that distance, I was running through the neighborhood I grew up in and the song Lights of Home from U2s Songs of Experience album came on. God works in mysterious ways—was it a coincidence that this song came on as I was passing White Oak Lane? As I remembered all the happy times I had growing up in that neighborhood, one question kept bubbling up in my head—who am I?

When I was a kid, I was “one of the twins.” I don’t think I ever formed my own identity as it’s tough to do so when you are constantly being compared to your built in playmate (something that my kids can attest to I’m sure as they were always known as “The Triplets” or “The Trips” as my sister refers to them as). I know that we have different parts of our identity which are influenced by the various roles we play in life—spouse, parent, son/daughter, employee, etc., but even that realization wasn’t satisfying my curiosity as mile 4 turned into mile 5.

As my feet kept propelling me forward, I started to think about an interview I did recently with an author named Ashleigh Renard, who started telling me how she learned from an early age to put her needs last, which is something that she carried into her marriage. Here’s what she has to say about that:

I have to say, I’m guilty of the same. Thinking back to the questions I had earlier in the run, for so long I had defined myself externally—Jimmy’s brother, Nicole’s husband, Grace, Patrick, and Maggie’s father, it was no wonder I was having a mild existential crisis as mile 5 turned to mile 6.

Then, the universe gave me another gift. The song “Get out of your Own Way” came on. In it, Bono sings:

Get out of your own way, oh, I

Get out of your own way, oh, I

I could sing it to you all night, all night

If I could, I’d make it alright, alright

Nothing’s stopping you except what’s inside

It hit me—I’m the one standing in my own way. The line, “Nothing’s stopping you except what’s inside,” smacked me in the face as I got back to my Jeep after running 6.2 miles this morning. It’s up to me to get out of my own way. I can define myself. This realization made me excited for all of the different possibilities ahead of me.

Earlier in the run I was craving a hug from my mother because I felt sad and confused about what the future holds. By the end, though, I still wanted a hug, but for a different reason—because I felt as if I had achieved some kind of mini breakthrough and wanted to share it with the person who gave me this life that I was so very confused about moments before.

This is my first Open Mike Sunday Reflection. Be on the lookout for more throughout the season of Lent (and beyond). To stay up to date on all of them, be sure to follow me on Instagram @uncorkingastory.