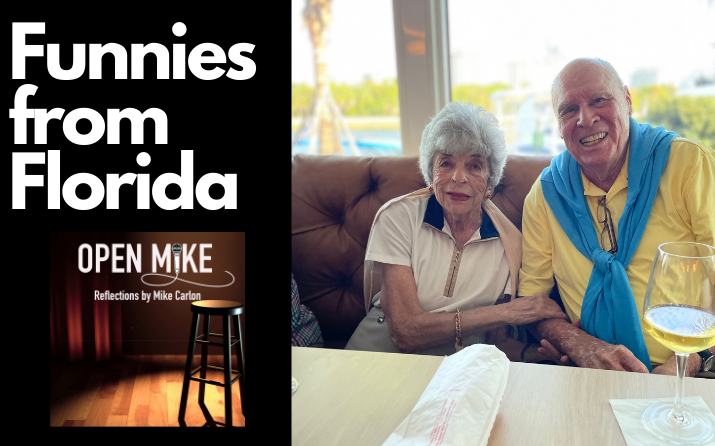 I just spent a week in Florida visiting my parents and came to the realization that, even though my children are on the cusp of leaving the nest, God doesn’t want my parenting skills to go to waste.

My mother, who always had a voracious appetite, eats like a bird and I found myself in steep negotiations with her to try and get her to eat. Much like my kids did at mealtime when they were younger, she’d protest by saying, “I’m not hungry!” While she may not have felt hungry, I knew that she was because I’d find her snacking on these little pudding packs my sister bought for her the week before. It took all my energy not to say, “You can’t have any pudding until you eat your meat,” but I knew a Pink Floyd reference would be lost on her.

I did find that she likes Milano cookies, though. I learned this when I found a bag of them empty in the microwave. She used the Shaggy defense when I asked if she ate all the cookies (“It wasn’t me”) but the crumbs on the front of her tee shirt told another story. I was happy she ate them though, because I secretly bought them for her.

After dinner, I learned just how much the two of them enjoy a bowl of ice cream. Apparently, they play a game called who can eat theirs the fastest while slurping the loudest. What I heard sounded like two dogs having a chugging contest from the same bowl. God bless them, though, the joy they got from that ice cream paralleled the excitement they must have felt the day I was born, which is a story mom made sure everyone in earshot heard frequently the night we went out to dinner with some of their friends.

The Coral Ridge Yacht Club is their spot on Wednesday nights, or should I say was their spot on Wednesday nights. The service was so poor when we were there that everyone agreed that they’d give the Yacht Club a break until it “got its act together.” Next Wednesday night’s meet up will be at a place called the Shuck and Dive, which sounds like the name of a seedy gentleman’s club. While waiting for the food, mom wanted to make sure everyone knew that I was supposed to be a large baby girl–which explains why she and dad were so surprised after she gave birth to twin boys. Now this is a story I’ve heard before, so as she began sharing it, I excused myself to go powder my nose and reapply my mascara.

My father has entered that stage of life that can best be summarized as the I have few fucks to give stage. Case in point, after coming up from the pool, I found him sitting on his favorite chair wearing nothing but his birthday suit while reading the Post. One of my favorite Post headlines appeared on the front page during the Anthony Weiner scandal. It read Hide the Weiner and that was exactly what was going through my head after my father got up and started walking towards me to see what I was having for lunch (a smoked turkey sandwich on a croissant in case you’re interested). Thank God it wasn’t a hot dog.

The man keeps himself active, though, and his mind is sharp as a tack. Apparently his secret is treating every phone conversation as if he’s back at Amex and negotiating the biggest deal of his life. He and mom were responsible for bringing dessert to a St. Joseph’s Day party on Saturday night and cannolis were requested by the host. Much to dad’s chagrin, the Italian bakery across the street works on a first come first served basis and wouldn’t budge on their no pre-order policy (have you ever heard of such a thing, Michael?). Jim Sullivan, who he’s splitting the cannoli cost with, recommended that dad try Publix so he gave them a call. I couldn’t hear what happened on the other end of the phone, so I’ve completely made that part up. The exchange is below:

Dad: Hi, this is Don Carlon, and I have a question for you.

Dad: Who am I speaking with, darlin?”

Dad: Ida, do you have cannolis?

Ida: Only the best in town.

Dad: I don’t do anything small, Ida.

Ida: Well aren’t you a frisky one today!

Dad: Would you like me to give you my card over the phone?

Ida: No need, Mr. Big. When will you be able to pick them up?

Dad to me: I still have it, Michael.

Me: And you did it all without wearing pants. You are truly the master of your domain!

Dad: Stop being a wiseass, Michael.

I had a hard time sleeping the night before I left because one of their smoke alarms decided it was time for a new battery and I couldn’t find a nine volt in my parent’s drawer of goumizgams. I noticed that the light was still on in the living room and that my mother had fallen asleep in a chair while doing a crossword puzzle. I gently touched her arm to wake her and then guided her into bed and kissed her on the forehead, something I’m sure she did for me countless times growing up. It did remind me, though, of all the times I tucked my kids into bed while visiting “Maga and Crappa” in Florida. I had flashbacks of them running around the apartment naked after a trip to the pool and asking for treats such as cookies or ice cream after dinner.

I witnessed so many milestones with them down in “Flodu.” They attempted walking while pulling themselves up around the round coffee table in the family room. I taught them how to swim in the pool down there. There were lost teeth, sunburns, and midnight trips to Walgreens for thermometers and Tylenol. It’s the exception rather than the rule that I go down to Florida without the kids and I was really missing them that Thursday night.

All this is to say how grateful I am for all the times I spent in Florida with my family. Also, I am truly blessed to have Don and Arlene Carlon as parents, and don’t for a second believe my mother wishes she had that large baby girl after all.