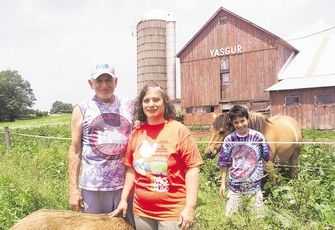 Two weeks ago I was running a project for a large financial services company and with me was my friend, producer, and director Joe Indusi.  Joe and I have done hundreds of interviews together and we were doing some storytelling over lunch when one of the clients who we were working for joined us and asked us to tell her some stories about the interesting people we have met doing the work that we do. We told her about the former gang member we interviewed in a Chicago tenement who was shot six times and showed us the scars to prove it. We also talked about the woman who broke down in tears in the middle of an interview about health insurance just before she admitted that she recently found her sister dead on the couch.

“Wow,” my client said. “Those are powerful stories but tell me, out of all the interviews you have done, which is most memorable.”  I then recounted the following story.

A few summers ago I was working on a project for a sports nutrition brand that had me interviewing three different types of athletes; high school, weekend warriors, and professional.  In the later category were Brian Roberts, then of the Baltimore Orioles and Dhani Jones who at the time was playing for the Cincinnati Bengals. You might think that these two interviews are the ones I was most excited about but you would be wrong.  In actuality, the interview I remember most was one conducted with a high school athlete in Phoenix, AZ; and the excitement I have about this interview had nothing to do with him.

For context, this was the last in home interview of the project and by then the team had a clear understanding of what all the key learnings were.  As such, this last interview was a formality as we did not expect to hear anything different.  I remember the home we went to because it was unlike all of the others; it was a week before Christmas and for the prior two weeks we had been conducting interviews in and around Boston and Phoenix and every single home had Christmas decorations up. This one was the exception; no lights, no tree, no plastic Santa on the front lawn. Yet the fact that a family who did not celebrate Christmas owned the home isn’t why I remember the interview so well; it was who the family was.

My clients and I entered the home and were greeted warmly by the respondent’s mother while his father, who happened to be much older than the mother, remained on the couch.  I could tell he was a bit skeptical of who these people were that just entered his home.  We started with some formal introductions and part of that is to get a consent form signed from the respondent and an adult over 18 living in the household.  Once the topic of paperwork came up, the father on the couch sprang into action to make sure his son wasn’t signing his life away; it appeared as if he had a distrust of anyone in the business world.

With signatures behind us I began to explain who I was and that we had flown to Phoenix from the east coast in order to interview different types of athletes about their use of protein supplements.  The mother thought it was fascinating that we had flown from the east coast to do this work and she mentioned that she and her husband had recently moved to Phoenix from upstate New York.  I explained that my mother’s aunt and uncle were farmers in upstate NY and asked where they came from.

“The Bethel area,” the mother replied.

Being the music lover I am I asked, “Near where Woodstock happened?”

“Kind of,” the father said off hand.  “You look too young to know anything about Woodstock.”

Now I am convinced that I was born after my time.  Cut me, and I bleed classic rock and roll! “I love music from that era,” I offered. “I wish I could have been there.”

“It’s changed a lot now,” the mother said. “So many rules, it’s so corporate. It’s a shame what happened. That’s why we had to leave. We couldn’t take it anymore.”

“Why would that cause you to leave?” I asked, completely forgetting that I was there to discuss protein supplements with their son.

“We own some of the land where Woodstock was held,” Roy said.

“Not all of it – just 100 acres and the house where Max Yasgur lived.”

I couldn’t believe what I was hearing; I was talking to history and now I had a chance to uncork the story of Roy Howard and Jeryl Abramson. It was a music lover’s dream come true! However, I was reminded by the people who were paying me to do this research that we weren’t there to take a trip down memory lane (or any other type of trip for that matter), we were there to talk protein. So I changed course and began to interview their son about his use of protein supplements for his football training, or baseball training, or soccer training, I really can’t remember the specifics of what he said as I was so enamored with who his parents were.

I wondered who they got a chance to meet back in the summer of 69. What was it like to see a very young version of The Who play? Was Hendrix’s performance as electric in person as it seemed in the video?  Was the brown acid really bad? These are questions I never got to ask as our interview with their son, whose name is Zack, ran late and he had school the next day.

Since recounting this story a few weeks back, I prayed to our lady of Google to see if there was any information about either Roy or Jeryl.  I learned that Roy died last year shortly before he and Jeryl won a 17-year legal battle to allow gatherings on their property. A bittersweet victory indeed!

I truly love what I do for a living because it allows me to meet so many interesting people with their own stories to tell.  Sometimes the stories are “small” but every now and then the stories are big. I honestly couldn’t imagine doing anything else for a living.