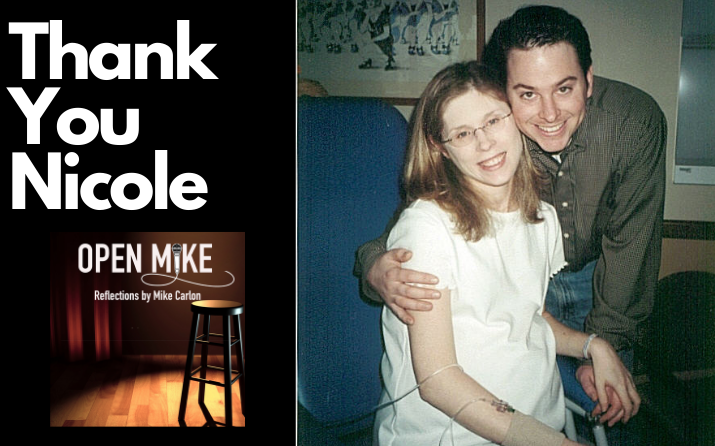 It may appear as if I am two days late with this week’s entry, but I have a story about that. You see, I needed it to coincide with today’s episode of Uncorking a Story, which profiles an author named Aileen Weintraub who wrote a memoir about being on bedrest during her high risk pregnancy. Our conversation inspired me to share a story about my wife, who twenty years ago gave birth to the greatest gifts I have ever received in life, our children Grace, Patrick, and Maggie.

A triplet pregnancy is, by default, considered high-risk and I remember the day we found out that Nicole was pregnant with triplets. For weeks up until that point, we thought she was having twins. She had three ultrasounds prior to that point in time all clearly showing two babies, creatively named Baby A and Baby B. Now just before the ultrasound where Baby C magically appeared as if it had beamed down from the Starship Enterprise, my father-in-law suddenly passed away. The stress of this loss was evident in my wife’s body and we walked into that doctor’s appointment expecting to hear bad news.

You can imagine the relief we should have felt when the technician said, “Baby A looks fine and Baby B looks fine. Wait a minute, that’s interesting…”

I don’t know about you, but I never want to hear a healthcare practitioner say the words, ‘That’s interesting,” while she has an ultrasound scanner pressed against my wife’s uterus.

“What’s interesting?” I ask, hoping the answer wasn’t, “One of the kids has a hoof. Are you sure Mike is the father?”

As you can surmise, none of the kids is equine and that the interesting observation made that morning was actually the revelation we were going to be the parents of triplets and not twins. Our contrasting reactions to this news summarize our personalities perfectly; I started to laugh and Nicole started to shake. Why laugh? We had gone in expecting to hear bad news and we just heard good news–good things come in threes, right? Why shake? It’s a perfectly normal response given she was the one who was going to be carrying them. Looking back, it would have been completely appropriate if she slapped me.

Twenty weeks into her pregnancy, the doctor noticed that Nicole was having contractions, so he put her on at home bedrest and a drug called Terbutaline, something designed to prevent preterm labor. She also had a monitor that she had to wear a few times per day which sent contraction data to the doctor.

As time went by, not in the Casablanca sense, but in the let’s prevent a premature birth sense, Nicole’s body built a tolerance to the Terbutaline and at twenty-six weeks was admitted into the hospital because the next step in the “keep the babies baking” plan was a drug called Magnesium. If you’ve been on it, I am sure you are cringing. For the unfamiliar, Magnesium is a muscle relaxant, but it doesn’t discriminate. It relaxes all of your body’s muscles, not just the ones that are contracting during preterm labor. She couldn’t see the TV because her eyes were so blurry. Reading was out as well. Even if she was allowed to walk, she would not have been able to. Oh, and another wonderful side effect was that it made her feel as if she had a hangover all day long, without any of the benefits that precede hangovers. For the next six weeks, she felt as if she’d been in constant recovery from a 42 day frat party she’d never been to.

Magnesium, though, comes with a price, and not just the outrageous fees I kept seeing on my statements of benefits from Cigna. After six weeks, her body was breaking down and she had to come off it because her blood pressure was through the roof and her liver count matched that of Hunter C. Thompson’s. Just hours after coming off of it, the babies came.

I’m sharing all of this with you for a number of reasons. First off, and this is something I don’t acknowledge nearly as much as I should, my wife was a rockstar during her pregnancy. I’m not saying there weren’t some bad days or dark times during her bedrest, there absolutely were, but she put her freedom on hold for six long weeks to give the kids a fighting chance. Delivering at thirty one weeks meant she barely got into her third trimester before the kids rounded out our family. They still had quite an uphill battle in the NICU, but if she hadn’t gotten them that far, we would not have the three healthy soon to be twenty-year-olds that we have today.

Secondly, I’m sharing this story because of something Aileen said during our interview. Women are conditioned to believe that pregnancy should be a happy time, but when you are carrying a high-risk pregnancy, that’s not always the case. In fact, many feel guilty because they aren’t–or didn’t–enjoy this time in their lives. It’s hard to enjoy life with so much anxiety running through your body. As such, these women feel alone and as if something is wrong with them. There’s a lot of talk about postpartum depression, but prenatal depression isn’t spoken about. So I wanted to share this story to help amplify Aileen’s message that prenatal depression is real and nothing to feel ashamed about.

I’m going to post links to my interview with Aileen below in case any of you would like to listen or if you know someone who would benefit from it.

Lastly, I want to end with a big thank you to my wife, Nicole, who is the reason we will all be gathering in a few weeks to celebrate our kids’ twentieth birthday. I don’t say it nearly enough, but you gave me the three best gifts I’ve ever received in life, and I thank you so much for that.