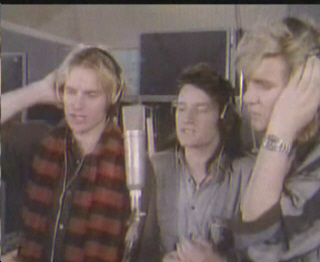 Almost 30 years ago, a group of recording artists led by Bob Geldof formed an ensemble called Band Aid to raise money for famine relief in Africa. If you are a child of the 1980s like me you’ll remember the single “Do they know it’s Christmas?” a fundraising vehicle for famine relief.

I heard this song recently and, to put it mildly, I was appalled. This is a very difficult thing for a child of the ’80s to admit as I remember the song with a fondness as many of my musical heroes banded together to fight famine in Africa. That said, listening to the song as an adult has changed my mind. If you don’t agree with me, follow my on a closer examination of the song.

Let’s start at the very beginning, which, as Julie Andrews can agree, is a very fine place to start. The title of the song is “Do they know it’s Christmas?” Perhaps this should be renamed to “Do they care it’s Christmas?” Relief efforts went to support the starving in Ethiopia. According to Wikipedia, Christians make up approximately 63 percent of Ethiopia’s population. A large percentage of Ethiopians likely don’t care that it is Christmastime.

How about some facts?

“There’s a world outside your window, and it’s a world of dreaded fear, where the only water flowing is a bitter sting of tears.” First off, Ethiopia is barely outside our window. Secondly, there are many rivers in Ethiopia including the Blue Nile river which flows in the to Mediterranean and the Jubba River flowing into the Indian Ocean.

And what ’80s relief song wouldn’t be complete with a healthy dose of guilt? “And the Christmas bells that ring there are the clanging chimes of doom. Well tonight thank God it’s them instead of you.” This last line was song by Bono, who is a personal hero of mine but come on, what’s with that guilt-ridden last line? He may as well say, “Gee it sucks to be an African so don’t cry when Santa Claus doesn’t bring you the latest Hess truck.” Besides, doom and you don’t even rhyme.

Speaking of wallets, how about looking closely as to where the money went? There have been allegations over the years that money raised by Band Aid actually went to support local military leaders in the region. Artists themselves are quoted as being upset that much of the money raised didn’t actually get into the hands of the most needy but rather into the pockets of the government leaders.

So the next time you are driving in your car with your children and you hear George Michael, Boy George, and the various members of Duran Duran sing about how bleak of a place the un-snowy Ethiopia is, pull over to the side of the road and engage in a teachable moment. Tell them that 1980s where a time when mistakes were made. For proof, later that day pull out some old photo albums showing your mullet, your stonewashed jeans, your leg warmers, and your United Colors of Benetton sweaters. Then thank God it was you instead of them