Ode to the Waffle House

This week I had the pleasure of running a series of focus groups and accompanied shops in Kansas City. Ironically enough, all of my flights departed and arrived on time. This is noteworthy given the fact that I departed from and returned to Westchester County Airport. Those in the know realize how much of a gamble that can be given that there are 2 factors working against you; 1. Westchester gets the lowest priority when NY airspace is congested and 2. A flight out of Westchester likely means you are connecting through Chicago O’Hare. Enough said.

So, while I hate leaving the family on a Sunday afternoon, I was happy to get to where I was going on time. The upgrade from Chicago to Kansas City was a nice touch –even though it was only an hour flight and the flight attendant (who apparently is now only present for our safety) did not bring around those scalding hot towels or the warm nuts. I for one was disappointed by the later as I always like to have some warm nuts in my mouth when I travel business class. In the immortal words of Ed McMahon, “Hey Ohhhh.”

Before I get to my experiences with the research itself, lets first discuss the meals of the week. A 2 hr layover in O’Hare (both coming and going) means a stop at the Burrito Beach. No towel or sunscreen required, just the desire to eat more calories in one sitting than the average bear needs to consume in a day. Hey, it beats the other choices of McDonalds, Panda Express (where I am convinced that their signature Orange Chicken is actually Panda meat), or the heartburn guarantee you get at Gold Coast Dogs.

Monday morning involved a breakfast meeting with my colleague (Iggy) and my client (Bob). The logical choice was Waffle House for four reasons; 1. Bob wanted to go there and even though we picked up the tab, he is the one paying the bills. 2. Iggy had never been to one so we had to rectifythat. 3 The Waffle House has a jukebox filled with outlaw country (I always like my “two dots and a dash” with a healthy side of “A Country Boy Can Survive”). 4. Where else can you go for breakfast and be served by a pregnant teenage girl wearing a tee shirt stating “Jesus is my Savior?” Did you know that the Waffle House is the world’s leading server of T-Bone steaks? I would add this as a fifth “reason to believe” but I am hesitant to do so without a source for the data for fear of being sued by Denney’s or the Oasis Truck Stop on 441 in Ft Lauderdale. 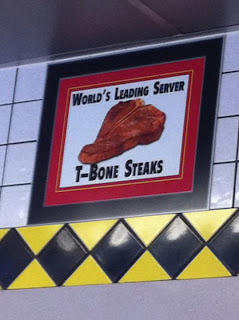 I suppose that I should mention something about the research itself given that is actually what I get paid to do. The topic this week was health and wellness. Now just about everyone around the table for each group was able to tell me what health and wellness means to them by providing examples around eating right, exercising, and reducing stress. That said, I am not sure everyone practiced what they preached. Many were, how shall we say, not wanting for food. One actually brought a Big Gulp in with her – or maybe it was one of those diabetic destined beverages from Sonic. I am not sure as I was too busy counting  her chins.

While it was quite ironic having a few overweight people talking about how health and wellness fits into their lives, I could not help but be inspired by one woman who claimed to have lost over 70 pounds in the past few months. “Why did you decide to lose the weight?” I asked to which she replied, “I was just so sick of being overweight.” She did not point to a health scare or being embarrassed to be seen in a bathing suit. She simply wanted to be healthier. Amen to that!

All in all, I really enjoyed my time in Kansas City – the people were friendly and the town itself is quite nice. That said, the best part of any business trip is coming home. Thursday night was St. Patrick ’s Day so my wife and I did the obvious, we went out for Mexican (really, it is amateur night at the Irish Pubs in town). I was recounting my trip to Kansas City to our waiter when the woman one table over informed us that she just moved back east from Kansas City and really misses the town. I could not help but think to myself, I can see why; there are no Waffle Houses out here!